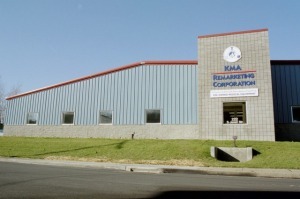 Back in 1993, healthcare professionals Dana Smith and Bill Boyle recognized a need for affordable, quality medical, EMS and rescue products throughout the world, and they decided to partner up in a new venture.

The did a lot of research and soon discovered that a tremendous amount of equipment was available from many sources throughout the United States and Canada and thus KMA Remarketing Corporation was born.

"We were both paramedics at the time and worked out of my home, and started experimenting with it overseas mostly," Smith said. "We had one phone, one fax machine and started the business as best we could."

Smith said that it took about five years before they knew they were on to something that would last, but still jokes that on any given day they could be "two weeks away form bankruptcy and a month or two from being multi-millionaires retired on an island somewhere."

Over the last 17 years, the company has moved from its humble beginnings to three DuBois, Pa.-buildings comprising over 50,000 square feet, complete with showroom offices, a biomedical engineering department and 26 full-time employees.

"There were guys doing some overseas stuff...some radiology guys, some were doing bits and pieces, but we were one of the few if not the only one that does all 6 things that we do. A lot of people specialize in one thing, We do almost anything," Smith offered. "We buy the used product and offer a service-oriented base to get equipment in, sell it domestically and internationally, offer bio-med services, de-install and reinstall services, and do refurbishments where we build it down to the bare bones and build it back to OEM specs."

Smith credits his employees with helping the business become what it has. With their emergency medical background, staff have a great work ethic and are more than able to respond to workplace challenges.

"I am smart enough to know that I have to surround myself with great people and am very fortunate to have exceptional employees," he said. "They have all been hand picked and a lot of the guys and gals came from EMS and fire service backgrounds. We knew how they dealt with cardiac arrest and a car load of kids if it was wrecked...and you know how they will act when the truck doesn't show up on time."

KMA also prides itself on its customer service, dealing with a $1 order or a $1 million order as if it were coming from the most important customer in world.

"We try to live by the golden rule. That's simplistic, but we try to treat others like we want to be treated," he said. "We are moral, even if it costs us money. We will work 24 hours and have a very solid worth ethic with real belief in customer satisfaction."

Looking ahead, Smith would like to expand its bio-med services and sees other areas for expansion in the company.

"It's real simple. We want to continue to be the people who make a difference in the health care world," Smith said. "We always did do that as medical and firefighters and [responders], but now we do it in a different way. Every piece of equipment we deal with we treat it as if it will be utilized by one of our own family members."