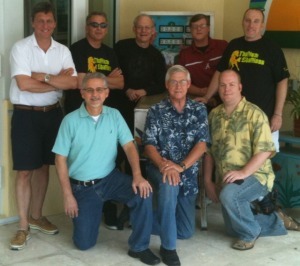 This might be the best way to describe a rock band made up of nuclear medicine professionals. The Thallium Stallions is the very fitting name for the band, which is comprised of clinicians, scientists and professionals from all around the country. The band is performing at an event at the Society of Nuclear Medicine conference next week in Salt Lake City.

Their music is a blend of classic rock and country including some new twists on hit songs.

"Many of the songs are recognizable but we rewrote satirical lyrics," said Dr. Allen Smith, a band member and chief commercial officer of BC Technical, West Jordan, Utah. For instance, the Rolling Stones' "Brown Sugar" has become "Fluorine Sugar."

"We're taking a picture of your heart, we're going to tell you what to do, you might need another statin, but it don't need you," Perry Collins sings to the familiar tune, now a paean to isotopes and other nuclear inventions.

Along with Smith and Collins, Dr. Jack Ziffer is the third founding member of the group, whose theme song is "We're An All-Nuclear Band," inspired by Grand Funk Railroad's "We're An All-American Band." The Thallium Stallions also sing legitimate covers for popular rock and country hits.

The band is excellent and the players have all recorded and performed professionally for many years. For the past five years they have assembled to rehearse and perform together at nuclear medicine society shows. Their new CD is currently in production and will be available for advance purchase in Salt Lake City.

The Thallium Stallions will perform Monday night June 7 at Green Street, a popular club at 602 East 500 South in Trolley Square, Salt Lake City, about six blocks east of the Grand America Hotel. The party starts with a customer reception for BC Technical at 6:30 pm. The Thallium Stallions will perform from 8:00 p..m until 11:30 p.m. The admission/cover charge is $5.00, however attendees of the BC Technical reception will receive complimentary cover.