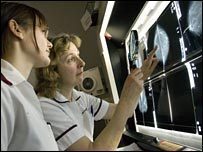 Patients with an early form of breast cancer - ductal carcinoma in situ or DCIS - who have high breast density could have increased risk for subsequent breast cancer, especially in the breast that did not originally have the cancer, according to research published Tuesday in Cancer Epidemiology, Biomarkers & Prevention.

Mammographic, or breast, density refers to the proportion of the breast that appears dense on a mammogram. It is considered to be one of the strongest risk factors for primary invasive breast cancer. In fact, research presented in April showed that women who have a breast density of 75 percent or more carry a risk of breast cancer four to five times greater than women with little or no density.

Researchers at Kaiser Permanente, led by Laurel Habel, reported that a previous study showed patients with DCIS who had higher breast density had about two to three times increased risk for a second breast cancer.

Habel and her team studied 935 women diagnosed with DCIS who were treated with breast-conserving surgery - not a mastectomy - between 1990 and 1997 at Kaiser Permanente of Northern California.

The researchers studied medical records and mammograms at diagnosis and calculated the risk of subsequent breast cancer during follow-up, to find that risk of a second breast cancer was elevated in women with higher breast density.

Of the 935 patients studied, 164 had a subsequent ipsilateral breast cancer - breast cancer on the original, cancer-affected breast - and 59 had a new primary cancer on the other breast. These findings confirmed the researchers' hypothesis that there would be an increased risk of subsequent cancer in the breast with the initial cancer and also, in the opposite breast.