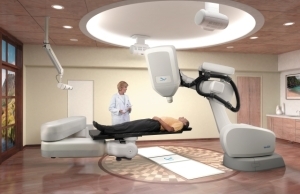 "In our mind, it's no longer investigational or experimental therapy," study co-author Dr. Debra E. Freeman, a radiation oncologist with CyberKnife Centers of Tampa Bay in Florida, told DOTmed News. "It's a valid option in the treatment of low-risk prostate cancer."

CyberKnife is a robotic radiosurgery device made by Accuray Inc. of Sunnyvale, Calif., which can deliver "hypofractionated" treatments -- that is, high doses of radiation precisely sculpted to the tumor or target, and delivered in a smaller number of sessions. It was approved by the U.S. Food and Drug Administration to treat tumors anywhere in the body around nine years ago.

For the study, the patients received between 35 and 36.25 Gy in five fractions.

Freeman said slower growing, "indolent" prostate cancers are thought to respond better to hypofractionated treatment, as opposed to radiotherapy treatments where smaller doses are spread out over a longer time. "They are not exquisitely sensitive to low doses of radiation, and are more sensitive and respond more to higher doses of radiation," she said.

In the study, published online this week in Radiation Oncology, researchers examined results from a pooled group of 41 patients from Stanford, Calif. and Naples, Fla., who received treatment between 2003 and 2005. The main endpoint was biochemical disease-free survival after five years, a standard measure that looks at whether prostate-specific antigen levels remain low and stable following treatment, suggesting disease is absent.

For the patients, at a median five years after therapy the biochemical disease-free survival was around 93 percent, results comparable with surgery and other forms of radiation therapy, Freeman said.

Toxic side effects from zapping the prostate were also rare, with no rectal bleeding or ulcerations, and no significant damage to the bladder, Freeman said.

"With any kind of radiation, there's a risk of some damage," she said. "You can't really get to the prostate with radiation without brushing by the bladder and the rectum on the way there. They can be injured in surgery, as well."

However, one patient did have a urologic problem, but Freeman said it was unclear if it was caused by the radiation treatment or an earlier procedure used to dilate the urethra because of difficulties passing urine.
1(current)
2