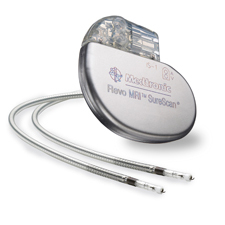 Medtronic's RevoMRI pacemaker
The Centers for Medicare and Medicaid Services said in a memo Tuesday it had enough evidence to justify paying for MRI scans of patients with the new MRI-safe pacemakers.

CMS said it was proposing to update the language in the NCD Manual to remove the contraindication for Medicare coverage of MRI scans in patients with the implantable devices, if the devices are approved by the Food and Drug Administration for use around MRI machines.

The update revises a Feb. 24 decision to cover MRI scans for Medicare beneficiaries with the MRI-safe pacemakers only if they were participating in a clinical trial.

CMS said it was moved to reconsider its rules in February after receiving a letter from Medtronic Inc., the Finley, Minn.-based manufacturer of the RevoMRI SureScan Pacing System, the the first MRI-safe pacemaker to go to market. The FDA approved the device in early February.

Currently, the RevoMRI pacemaker can only be used with a 1.5-Tesla scanner and only under certain conditions.

CMS said the reconsideration doesn't include a coverage determination for Medtronic's RevoMRI or other pacemakers or change other contraindications for MRI scans.

The new proposal comes at the end of a 30-day public comment period on the coverage changes, which closed earlier this month.