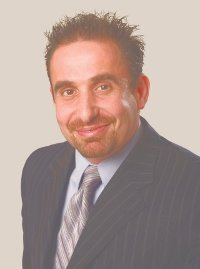 Radiation therapy goes back more than 100 years. And today, it’s a critical part of tumor control. In fact, about half of all cancer patients receive some type of radiation as part of their treatment. In the mid-20th century, the next evolution — radiosurgery — arrived and is now used to treat tumors non-invasively throughout the body.

Whether we’re talking about conventional radiation therapy or radiosurgery, the goal is the same: provide effective tumor control while minimizing injury to normal, healthy tissue.

One of the critical challenges to achieving this goal is accounting for tumor movement. Tumors or organs surrounding a tumor site can shift during treatment due to respiration, bowel gas, filling of the bladder or other patient movement—this is especially true for tumors in the lung and prostate. As a result, clinicians traditionally have needed to expand treatment margins to include not only the tumor, but also significant normal tissue, opening the door for unacceptable toxicity and injury to healthy cells.

Conventional radiation therapy, for example, was developed to treat widespread, diffused disease and even today is most often employed for palliative purposes or in conjunction with surgery. Equipment employs wide fields of radiation that encompass both the tumor and a large amount of normal tissue. To account for movement, pre-treatment imaging is often used to determine the location of the tumor and potential variation due to motion. Given that patients and tumors are not static during treatment and tumor motion is not tracked in real time during the delivery of conventional radiation therapy, this process is inaccurate at best.

Radiosurgery, on the other hand, was developed to ablate tumors (not just slow their progress) and works by delivering a large, very precise dose of radiation via hundreds of uniquely angled non-coplanar beams that all intersect at the tumor. By ensuring high levels of accuracy, radiosurgery allows clinicians to reduce treatment margins, maximally exclude normal tissue from the treatment field and complete treatment in just one to five sessions.

Despite the advances of radiosurgery, motion management has historically been a challenge. Going back to the 1960s when the first applications of radiosurgery were for intracranial targets, motion was managed by bolting the patient’s skull to a rigid metal frame and securing it to the treatment table. The discomfort and restrictions of frames meant that treatment was usually completed in one day or the patient was hospitalized. Some radiosurgery systems still require a frame and are limited to treating tumors only in the head and upper cervical spine.
1(current)
2
3