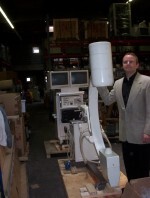 Alaka Medical Systems Inc. out of Brooklyn, N.Y. has exporting pretty much down to a science. The company specializes in pre-owned diagnostic imaging equipment: Mammography, CT scanners, C-Arms, X-ray, Densitometry, and Cath labs.

"We do know the specific needs of every country," said Ari Laufer, manager. "People look, for example, at the Middle East as though it were one market but it's not. Every country has its own needs both technically and as far as preferred brands. We try to learn the local market."

The company also exports to Latin America, Eastern Europe, India and other regions.

"Everything we sell we buy while it's still installed. We don't buy warehouse equipment," Laufer specified. "We deinstall the systems ourselves or send somebody we trust. We inspect and check all the accessories and make sure the system is 100 percent complete including manuals."

He stressed that the company ensures quality by functioning as a single point of contact for customers and doesn't broker, but rather owns most of the equipment.

"The advantage is that we are in control of the entire process from inspection to deinstall to transport, crating, and shipping, so there's no way to go wrong," Laufer said. "Sometimes you can blame the transport company for messing up or the deinstaller or the hospital--the seller. Here we are in control of everything. We even work very closely with a freight forwarder to provide Ocean/Air freight services worldwide. Our customers don't have to invest any time or energy making arrangements."

Alaka Medical Systems handles the process up to the port of entry into the arrival country and that handoff, too, is purposefully designed so that customs brokers receive the goods at the other end, streamlining delivery to end users.

"We strongly believe in selling to foreign dealers and letting the dealers sell to the end users in their countries. There are a lot of dealers and brokers in the USA who try to sell directly to doctors in other countries. But then the doctor gets in trouble because he's not aware of his own country's import or health regulations and it gets messy. We try to sell to dealers and let the dealers handle all the importation, customs, duties and their own regulatory agencies," Laufer said. "A lot of companies think they will make bigger profits by selling directly to the doctors--to the end users--in other countries because you can charge a doctor much more than you can charge a dealer. But that's not our philosophy. We believe there is enough money to go around for everybody. We would rather sell to a dealer who knows the regulations in the country. That way you don't end up with a machine stuck in customs for a year."

Most of the company's sales stem from word of mouth, aided by its strong, DOTmed 100 reputation.

"My advice to my fellow dealers is: Let's not turn this industry into a cutthroat business. There is plenty of business for everybody to make profit. We should not use razor thin margins as a selling point. Rather, we should all focus on maintaining the good reputation of our industry by ensuring the quality of our equipment, and providing great customer service and after-sale support."