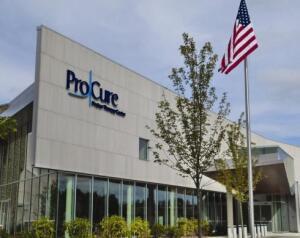 ProCure's N.J. center (Credit: ProCure)
A New Jersey proton therapy center opening today is the first to operate in the greater New York region and only the tenth such center nationwide.

ProCure Treatment Centers Inc, a developer of for-profit centers that offer the high-tech cancer treatment, said it was hosting a ribbon-cutting ceremony this morning for the $160 million facility. The 60,000-square foot center, ProCure's third, is located in Somerset, about a half-hour drive away from New York City.

The ProCure Proton Therapy Center features four treatment rooms: two inclined beam rooms, a gantry room, and a fixed beam room. One inclined beam room is opening now, but the company told DOTmed News by email it hopes to get the rest of the rooms online within a year.

As with ProCure's other two centers in Oklahoma City and Warrenville, Ill., it houses a massive, particle-firing cyclotron made by Belgian manufacturer IBA.

The center took under two years to build, the company said.

Princeton Radiation Oncology, a 10-doctor radiation therapy group in New Jersey and Pennsylvania, will provide clinical care at the new facility, and CentraState Health System, a nonprofit regional health group, will offer access to medical services not provided by the center but which patients might need while undergoing proton therapy, ProCure said.

ProCure said it has been evaluating patients since February, and the first patient will be treated March 26.

"It has been a long-time dream of mine to bring proton therapy closer to home," Dr. Brian Chon, medical director of the center and a radiation oncologist with Princeton Radiation Oncology, said in a statement.

Proton therapy works by accelerating protons to two-thirds the speed of light and shooting them at cancer cells to scramble their DNA. Because of the nature of protons, the radiation dose falls rapidly away from the target, theoretically letting doctors minimize the dose to healthy tissue. While many doctors think this could be especially beneficial for children with tricky spine and brain cancers, the technology has been the subject of some controversy, largely owing to the high costs of developing treatment centers.

ProCure, headquartered in New York City, has a center in Seattle set to open next year, as well as others in development in Michigan and Florida.

The company cited estimates that more than 150,000 New Yorkers and New Jerseyans will be diagnosed with cancer each year.