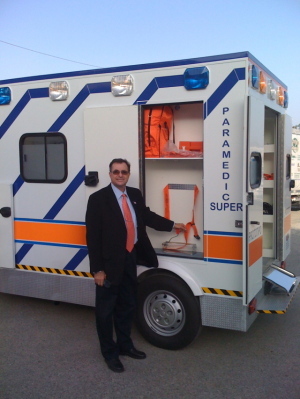 Theodor Basch
This week, Theodor Basch visited DOTmed. During lunch, we talked about the thermal waters in Hungary, where Theo is from; and the convenience of being able to communicate with Asia in the early morning and the United States in the late afternoon from Theo's office in Budapest.

Theo's company Orlando Systems manufactures mobile medical laboratories, ambulances and medical vehicles. He told me that private clinics and imaging centers are growing in Hungary. At the same time, public hospitals are feeling the financial crisis and some of them are closing. It would seem that private entrepreneurs are more successful than the public sector.

Theo was visiting the United States in an effort to find firms in the U.S. he can work with or represent to sell products in Hungary and Eastern Europe. Theo confirmed something we all know: Eastern Europe is a growing market. And Theo wants to rise with it.

Next year, when I go to ECR, I hope to make the short drive from Vienna to Budapest and I will report to you then on Theo's progress.