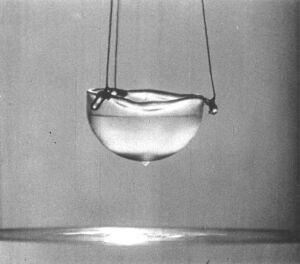 Liquid helium, shown here,
is needed to
keep MRI magnets
cold enough to work.
For the second most abundant element in the universe, helium is actually pretty hard to get hold of. On Earth, the only economically viable way to extract the substance now is to separate it from natural gas deposits.

But our supplies of this non-renewable resource are diminishing. Although the U.S. is currently the main producer of helium, and runs the world's only massive underground reserve, in Texas, we're running out. According to expert testimony at a congressional hearing last week on a proposed law that would shore up federal helium reserves, at the current rate of consumption, the U.S. could become a net importer of the stuff in the next 10 years.

Although it's generally not a top concern in the health care industry, roiled as it is by meaningful use regulations, device taxes and other big policy fights, MRI manufacturers and users depend on a secure, long-term helium supply.

Every year, millions of liters of liquid helium are consumed in the production and maintenance of MRIs, which need the substance to keep magnet materials cold enough to be superconducting, allowing them to work.

So, MRI makers are taking some traditional conservation steps in their approach to helium: reducing, reusing and, perhaps even one day, replacing.

One company, GE Healthcare, which testified at the May 10 Senate hearing, says it's even been able to reduce helium consumption on a per unit basis by 5 percent for each of the past five years, a plan it hopes to continue going forward.

"The whole concept of every molecule of helium counts, that's been a focus for us," Peter Jarvis, general manager of GE's global magnet and gradient engineering team, told DOTmed News.

The hearing was held to discuss the need for a proposed bill, floated by Sens. Jeff Bingaman (D-N.M.) and John Barrasso (R-Wyo.), which would help extend the life of the federal government's helium reserves, currently responsible for supplying one-third of the world's needs of the lighter-than-air element, but which could be largely sold off in the next few years.

The MRI industry actually uses a sizable amount of the globe's helium supplies, probably close to 28 percent, according to research done by Moses Chen, a professor with the University of Pennsylvania.

In his testimony before the Senate Energy Committee hearing last week, GE general manager Tom Rauch reckoned his company alone uses close to 5 million liters of helium in the production of the 1,000 MRIs it ships from its Florence, S.C. factory every year.

Breaking down that number, it results in about 5,000 liters being used in the production of each unit. Ultimately, each magnet ships with around 1,500 to 2,000 liters, with the rest having been consumed during testing and cool down, Jarvis explained.
1(current)
2
3