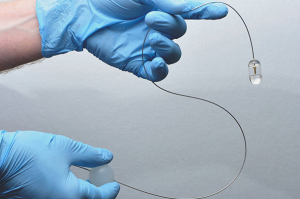 The technology, which is essentially an imaging system enclosed in a capsule about the size of a multivitamin pill, could be implemented rapidly, conveniently and in any location to screen patients for a precancerous condition known as Barrett's esophagus, as well as other pre-cancers and cancers of the esophagus, stomach and small intestine.

A report from the Wellman Center research team, published online in Nature Medicine this week, described the findings. In the study, doctors successfully imaged two subsets of patients — six known to have Barrett's esophagus and seven healthy volunteers — with the pill capsule, in roughly six minutes. Patients were not sedated, and images produced by the system revealed subsurface structures not easily seen with endoscopy and clearly distinguished the cellular changes that signify Barrett's esophagus, according to a statement from MGH. Study participants who had previously undergone endoscopy said they preferred the new procedure.

"The capsule provides information about the microscopic structure of the surface and what is below the surface. It does this for the entire esophagus, not just a small portion," Dr. Gary Tearney of the Wellman Center and the MGH Pathology Department, told DOTmed News by e-mail. "So, in essence, we are able to perform microscopy of the entire organ in living patients. This is an unprecedented capability that until now has not been available."

After the pill capsule, which is swallowed and carried down the esophagus by normal contraction of the surrounding muscles, reaches the entrance to the stomach, it can be pulled back up by a tether, which is connected to the imaging console and controlled by the provider. Images are taken throughout the capsule's transit down and back up the esophagus.

"The primary care doc can tell you to swallow this pill and in a minute or two you are done. The new technology opens up a tangible option for screening for Barrett's (and other GI diseases) that just doesn't exist today," said Tearney.

The imaging system inside the capsule is called optical frequency domain imaging (OFDI) technology, which provides cross-sectional images of the esophageal wall at microscopic resolution, according to Tearney.
1(current)
2