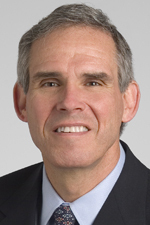 Dr. Eric Topol
(Credit: Teh Scripps Research Institute).
Dr. Eric Topol, nationally recognized cardiologist and director of Scripps Translational Science Institute, trumpeted the ways patients can use technology to take control of their own health in his keynote speech at HIMSS 2013 on March 5.

Topol kicked off his talk with a bird's eye view of technology today, mentioning that less than a decade ago, everyday technologies like YouTube and Twitter didn't exist. Smartphones — a technology Topol said is expanding faster than television or even electricity once did — are especially bringing on revolutions in health care.

But despite the existence of a wide range of health technologies, much of health care stays entrenched in old-fashioned thinking, he said.

"Cancer screening remains stuck in a 1960s view of the disease," he said, pointing out that $18 billion is spent on mammography each year, even though frequent testing may not be necessary for some women.

He pointed out that frequent screenings and unneeded check-ups are expensive and do not always lead to improved health.

He then shared or demonstrated several technologies that have the potential to save patients money, such as apps for eye exams, ear infection checks and sleep studies.

"Why go to a hospital sleep lab when you can just connect your phone and do your own sleep study?" he said. "And who can sleep normally in a hospital?"

In a theme consistent with the overall message of HIMSS13, Topol also spoke on the importance of patient involvement and a move away from physician privilege.

"Nothing about me without me," he said, repeating a patient advocacy battle cry that originated from Valerie Billingham in a session at the Salzburg Global Seminar in 1998 called "Through the Patient's Eyes."

To sum up his point, at the talk's close Topol shared a video clip from the movie Jerry Maguire with his own voice dubbed over that of Tom Cruise: "Show me the data! SHOW ME THE DATA!"