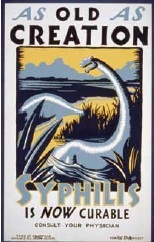 Several years ago, my wife and I applied for a marriage license at the County Clerk’s Office in lower Manhattan. The place had recently been remodeled, in part, in an effort to turn New York into a destination city for quickie weddings, much like Las Vegas. There were now computer kiosks you could use to fill out the application forms. There was even supposedly (though I never saw it) a device you could plug your iPod into. It would then broadcast your favorite song at that magical moment when a curt city functionary monotonically pronounced you man and wife.

To Manhattanites of a generation or two ago, all of this – aside from the monotone city functionary – would be quite new. Equally surprising, perhaps, would be what was missing. Unlike potential newlyweds for much of the 20th century, my wife and I did not need to go through a public ritual once required of all to-be-married couples in the state of New York: a blood test.

On April 12, 1938, when the Breitbart- Desmond bill was signed into law, New York State wasn’t the first to require serological testing for would be spouses. Its neighbor, Connecticut, had started a similar program three years previously. But it was a big step in a nation that had just begun a public conversation about a formerly hushed-over danger, a menace that was poisoning the young and weakening the human race: syphilis.

The British writer D.H. Lawrence blamed the pox, which likely originated in the New World, for being the source of the Puritan horror of sex. Thanks to the disease, intercourse was something that could kill you, or even corrupt your unborn babies. Whatever its subtle effects on culture, the latter was key – the premarital testing regimen was started mainly to prevent mothers from catching the disease and having children born with congenital syphilis, a once somewhat common cause of deformity and disability. “Too many people regarded syphilis as an unmentionable moral scourge rather than as a threat to the public health,” the St. John’s Legal Review said around the time New York’s law was passed.

The change wasn’t just social. It was technological, too. The Wassermann blood test, developed in 1906, meant doctors had a reasonable objective marker with which to diagnose the disease, and no longer had to rely on dubious clinical signs. Also in 1910, Nobel Prize winner Paul Ehrlich’s lab developed Salvarsan, an arsenic-based drug that was more effective, and safer, than the mercury products originally used to treat syphilis. Salvarsan still had terrible side effects – including apparently liver damage – and didn’t work on later-stage syphilis, but it was widely used until finally eclipsed by penicillin in the 1940s.
1(current)
2