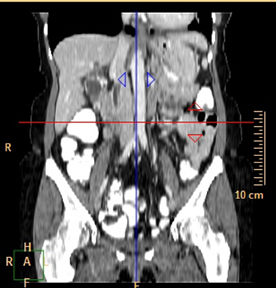 CT colonography image.
Courtesy of RSNA.
On March 11 two members of Congress re-introduced an act that would require CT colonography to be covered under Medicare. Commonly known as "virtual colonoscopy," offering the procedure as a screening option has been found to significantly boost rates.

Colon cancer screening rates in the U.S. can be as low as 54 percent, one reason that colon cancer is the second-leading cause of cancer deaths in the U.S. despite its 90 percent cure rate if it is caught early.

Several recent studies have found that CTC is both comparable to colonoscopy in detecting tumors in patients of all ages, and that it can boost compliance to up to 84 percent. CTC is less invasive and does not require the patient to be sedated.

Several private insurance companies as well as the Veterans Administration already cover CTC, but Medicare has lagged behind.

"We're in a situation now where when a patient is 64 they could go in for a virtual colonoscopy and that could be their screening method of choice, and they just don't have that option available to them when they're 65," said Brian Connell, the Medical Imaging & Technology Alliance (MITA) director of government relations, to DOTmed News. "It just doesn't make sense."

MITA as well as the Colon Cancer Alliance, the American College of Radiology and the colon cancer survival online group COLONTOWN all support the act, which was introduced by representatives Ralph Hall (R-TX) and Danny Davis (D-IL).

Connell said he hopes this time will be the charm, though if the act does not pass, the Centers for Medicare and Medicaid Services could make the decision to cover CTC independently.

"When there's such a mountain of compelling evidence, I think it really begs for everyone who has a role to start acting," said Connell. "I think that's what you're seeing in Congress, and we hope to see the same thing at CMS."