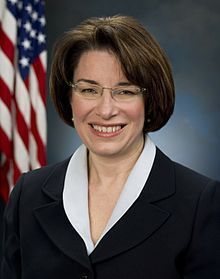 Sen. Amy Klobuchar,
leader behind the repeal efforts.
Late Thursday, the Senate reached a deal on how to fund the government past March 27th, included in that deal — the Fiscal Year 2014 Senate Budget Resolution — is an amendment that expresses support for the repeal of the medical device tax.

"Momentum is clearly growing in Congress to repeal the medical device tax as Senators continue to hear from their constituents that the impact is real — the tax is slowing economic growth and costing thousands of jobs," said Gail Rodriguez, executive director of the Medical Imaging & Technology Alliance (MITA), in a statement. "MITA encourages Congress to prevent further job loss and protect essential research and development by promptly repealing this harmful tax."

The amendment passed with 79 votes. It will proceed to the House for a vote.

This legislative effort is the most recent since February when Senators Amy Klobuchar (D-MN) and Orrin Hatch (R-UT) introduced a bipartisan amendment which garnered co-sponsorship from 21 senators, three of them being Democrats.

The medical device tax was included in President Obama's 2010 health care reform law to help raise roughly $30 billion over 10 years to offset the cost of reform. Beginning this year, the 2.3 percent excise tax applies to the sale of medical devices by manufacturers and importers, and manufacturers are required to pay an estimated $194 million per month in medical device payments. The medical device industry, which includes MITA, the Advanced Medical Technology Association (AdvaMed), the Medical Device Manufacturers Association (MDMA) and others, has been fiercely opposed to the 2.3 percent tax from the get-go. They applauded the passage of this latest repeal amendment.

"We encourage leaders in Congress and the administration to seize on this momentum and act to repeal this harmful tax," said Stephen J. Ubl, president and CEO of AdvaMed.