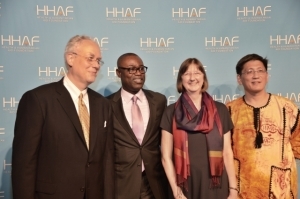 My wife Barbara and I with
Sammy Arthur (left) and David Chen (right)
Two weeks ago, my wife Barbara and I and eight of our friends attended the Health and Humanitarian Aid Foundation's annual Preston Robert Tisch Awards Gala aboard the Intrepid Sea, Air and Space Museum in Manhattan.

There's a photo here of myself and Barbara with HHAF founder Sammy Arthur and HHAF president David Chen.

Barbara and I have donated to this organization in the past and they have an interesting idea behind their charity mission: If you give food to hungry children at school, they will come; if they eat, they will be more alert and learn more. We all know that educating people is a good thing. So for ten thousand dollars, they feed a thousand children for a year.

Over 500 people attended the gala, including Olympic track and field gold medalist Sanya Richards-Ross, football players from the New York Giants and several other important figures. It was a memorable evening. If you want to learn more, here's a story we wrote about HHFA and the important work they are doing.