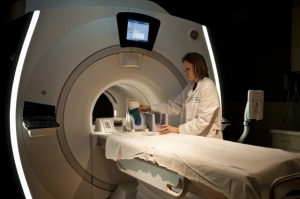 In addition to claustrophobia, noise generated from an MRI topped the list of complaints from patients undergoing exams. Conventional MRI scanners can generate noise in excess of 110 decibels, which means patients and anyone near the scanner must wear ear protection.

In an effort to improve the patient experience, GE developed a technology that the company said is designed to reduce MRI scanner noise to background sound levels.

"It's no louder than my computer that's next to me right now, it's got a little hum in it," Dr. Mark DeLano of Spectrum Health in Grand Rapids, Mich. told DOTmed News.

Besides improving the patient experience, a silent scanner has some very practical benefits — including allowing providers to communicate, being able to listen to the heart and lungs of sick inpatients, and perhaps even avoiding the need to put children under anesthesia during an MRI exam.

"Medicine shouldn't be part of causing troubles, it should be all solutions," said DeLano.

DeLano was also part of the research team that led to U.S. Food and Drug Administration approval of the technology. With the help of 10 patients at Spectrum Health, they compared patients regular scans to scans with Silent Scan, in addition to asking patients about their experience. Delano said they got some high quality images with Silent Scan in spite of the fact that there are some subtle differences because of the novel way the new technology is acquiring the images, which is a 3-D acquisition in combination with proprietary high-fidelity gradient and RF system electronics.

Julie B., who did not want to give her last name, participated in the testing as a migraine sufferer who needed scans to see if she might have a brain tumor. She was able to clearly hear the difference between the regular scanner and one using Silent Scan.

"There was a lot of banging in the first and the other [with Silent Scan] you could hear something, but it was not loud at all," she told DOTmed News.

Over the years, DeLano said he's heard complaints from patients saying that being in an MRI scanner is like being in a barrel with someone pounding on the outside.

"We all expect we're going to get the right diagnosis, but how we get to that diagnosis makes a difference to people," said DeLano.

"Not all the kinds of MRI we do is available silent yet, but it certainly opens door on how MRI can be done," said DeLano.