2013: The year of digital breast tomosynthesis? 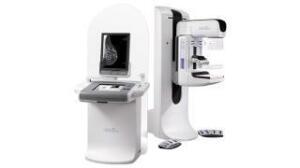 Hologic's Selenia Dimension
(Courtesy Hologic)
2013 could be called the Year of 3-D Mammography — just like the last three years. For the fourth year in a row, digital breast tomosynthesis was named the "hottest clinical procedure" by AuntMinnie.com readers and editors.

It's also been a big year for Hologic, the leading manufacturer of breast tomosynthesis systems. The company was named "Best in KLAS" for its 3-D Dimensions system. The awards are based on customer satisfaction and consistent success. The system also received the highest rating out of the 140 products evaluated.

"In the past year, the adoption rate of 3D mammography has increased dramatically as several large clinical studies validated the benefits of this groundbreaking technology," said David Harding, Hologic Group vice president, women's health. "We believe Hologic's 3D mammography is well on its way to becoming the standard of care in breast cancer screening. Recognitions such as these reinforce what we have known since we first introduced the technology — 3D mammography can detect cancers earlier when a woman's potential for successful treatment is at its greatest and can significantly reduce unnecessary patient recalls."