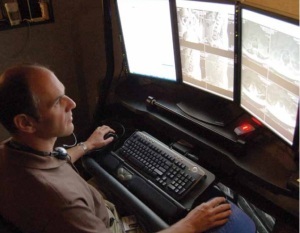 When teleradiology companies first appeared back in the 1990s, they operated under cover of darkness. Like the Tooth Fairy spiriting away molars from beneath pillows, teleradiologists would read late-night studies and have them waiting for on-site radiologists ﬁrst thing in the morning for a ﬁnal read.

Today, it’s a very different scene. Teleradiologists now work during the day, and they’re generally based in the U.S. Hospitals task them with ﬁnal reads, rather than preliminary, and a wide swath of specialists provide valuable reads from far away.

Telerad companies estimate that around 50 percent of hospitals are now using their service. The technology that allows for teleradiology — robust PACS, cloud storage and other image sharing techniques – is even more ubiquitous.

“In a way, teleradiology has really been adopted by all practices in the country,” said Ben Strong, medical director of Virtual Radiologic, or vRad, the largest radiology practice in the country. “They may not be using a third-party teleradiology vendor, but they understand the need to distribute studies digitally, and use it on a local and possibly regional basis.”

Despite its widespread use, teleradiology stills stirs up signiﬁcant controversy in the radiology world. Some radiology groups have vowed to “take back the night” to regain lost ground. Meanwhile, teleradiology continues to widen its scope, connecting hospitals with specialists and offering the last word on studies.

Final answers
One of the main changes shaking up teleradiology, and the way it’s viewed, has been a shift from preliminary reads to ﬁnal reads performed off-site. In 2007, CMS ruled that only radiology cases read in the U.S. could be billed for reimbursement. At the time, most teleradiologists were based internationally so they could read during daytime hours while it was night on the other side of the world. The cases they read were preliminary, to be looked over again in the morning by an on-site counterpart. As more teleradiology companies have hired U.S.-based radiologists, more have been able to offer ﬁnal, billable reads.

“Preliminary reads will go the way of the dinosaurs in a few years as more and more cost pressures come down on hospitals,” says Paul Johnson, vice president of sales and marketing at Aris Radiology. Today, 80 percent of his company’s interpretations are ﬁnal reads.

Johnson argues that preliminary reads are inefﬁcient, and that teleradiologists, just like their on-site counterparts, can be trusted to provide reliable ﬁnal looks. “There’s one big beneﬁt of the preliminary reading process, and that comes in the fact that every study that’s re-read is a built-in quality assurance process. But it is inefﬁcient,” says Johnson.
1(current)
2
3
4
5