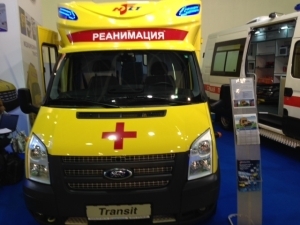 An ambulance on display at
the 23rd International Exhibition
of Healthcare in Moscow
Two days after returning from five days in Chicago for RSNA, I jumped on a plane for the 12-hour flight to Moscow so I could attend the trade show that is part of Russian Health Care Week.

Specifically, the show is called the 23rd International Exhibition of Healthcare and it is held in Moscow around the second week of December.

I was very impressed.

Similar to Medica or Arab Health or some of the other shows you may be familiar with, the show in Moscow covers just about anything and everything that a Russian hospital or clinic might need. Obviously, this is different from our shows, which specialize.

There were some educational sessions but nowhere near as many as I have seen at some other shows. I get the impression that the number one reason for a provider to attend this show is because they need to buy.

When I say anything and everything, I mean just that: MRI or CT, laboratory equipment or furniture, replacement casters or wheels, ambulances, drugs, beauty aids, vitamin, scrubs and more. If it is used in a health care facility, you will find it here.

The exhibition hall is modern, and like everything else in Russia, very spacious.

It did not seem like anyone was complaining about traffic even though the show was spread across six or seven different buildings that were all within easy walking distance of each other.

There were a fair share of companies from Europe and former Soviet Union, as well as local Russian producers. I only saw a few American companies and even fewer American speakers. But everyone I met was polite and friendly.

In some cases, an agent represents two companies that normally compete in the United States or Western Europe. I cannot figure out how they can pull that off but I saw it more than once.

There is some English, but for the most part, everything is in Russian.

Depending upon your product or service, this is definitely a show you want to take a serious look at.