Helium supplier EURO-HEL celebrating one year at its new facility 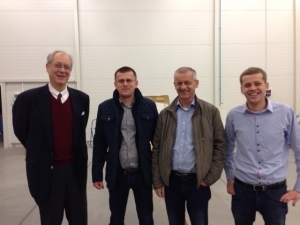 Phil with Marek Piglas
and his sons
If you follow my comments, you know that I am watching the helium market closely, as well as the independent service business in Europe. For that reason, I visited EURO-HEL at its facility about halfway between Warsaw, Berlin, and Vienna during my recent travels to the area.

The owner, Marek Piglas, has a lot to be proud of. He has built quite a business for himself over the last 10 years after he parted with the company BOC when they were purchased by Praxair.

Although he started out in a rental property, he now has a beautiful building equipped with helium transfer equipment, room for cold storage for MRI magnets and even enough room to pull in a tractor trailer to service a mobile MRI magnet.

Marek can also be proud that his two sons -- Michal and Jakub -- are working with him. Along with the other members of the EURO-HEL team, they are very familiar with the challenges associated with helium. They have vacuum pumps and everything needed to cool a magnet and load helium.

EURO-HEL can work throughout the EU, but they concentrate mostly in Poland, the Czech Republic, Solvakia, Hungary, Bulgaria, and sometimes Greece, even as far north as the Baltic states, including Lithuania, Latvia, and Denmark. I almost forgot Germany as well.

I see EURO-HEL as another example of how the European market is evolving and opening up to entrepreneurs like Marek.