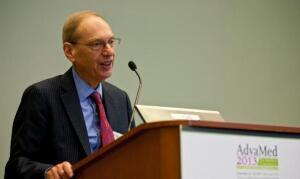 David Nexon
(Courtesy of AdvaMed)
The medical device excise tax continues to rile industry stakeholders and politicians on both sides of the aisle, and a new survey from the industry trade group AdvaMed is intended to aid in the ongoing fight to repeal the controversial 2.3 percent excise tax, which was included in President Obama's health care reform law.

Survey results examined the first-year impact of the tax on AdvaMed member companies and found some common trends: mainly reductions in jobs but also in R&D and U.S. investment.

"We said this was going to be bad for the device industry and ultimately patients and this survey shows we were right — this proves it's time to change course," David Nexon, AdvaMed's senior executive vice president for policy, told DOTmed News.

According to the report, the impact the tax has had on industry employment adds up to about 33,000 jobs. Specifically, it has led to employment reductions of approximately 14,000 industry workers and the foregone hiring of 19,000 workers.

"Figures were in line with projections from studies prior to implementation of the device tax. Some people challenged those studies and said job loss wouldn't be significant, but our survey results are pretty close to the original pessimistic projections," said Nexon.

According to material from AdvaMed, independent estimates of the relationship between direct employment in the industry and indirect employment among suppliers and in the general economy found a ratio of four indirect jobs for each direct job. Applying this ratio to jobs lost or foregone suggests that the impact of the tax on indirect employment would be approximately 132,000 jobs for a total job loss due to the tax of as many as 165,000 jobs, said AdvaMed.

As far as R&D loss, the survey found that roughly 30 percent of respondents have reduced R&D because of the tax, and almost 10 percent have relocated their manufacturing outside of the U.S. or taken measures to expand manufacturing at facilities abroad.

Investments have also been stifled by the tax. According to the survey, three-quarters of respondents said they have either deferred or cancelled capital investments as well as plans to open new facilities, reduced investment in start-up companies, found it more difficult to raise capital (among start-up companies), or reduced or deferred increases in employee compensation.

AdvaMed sent the survey out to its entire membership base — roughly 330 companies — at the end of 2013. The results were based on the 38 companies who responded, or 15 percent of AdvaMed members.
1(current)
2

What you may have missed at AHRA 2013

Are states ready for Medicaid expansion in 2014?