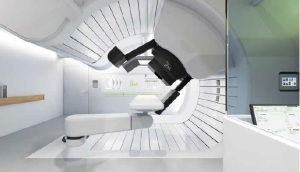 ProteusONE
From the September 2014 issue of HealthCare Business News magazine

As early as the 1950s, physicians in nuclear research facilities had been using particle accelerators to explore the practical application of protons against disease, but over the last decade the treatment has become a central — and sometimes polarizing— topic in the conversation about curing cancer. Using protons (instead of photons, such as X-rays) to eliminate tumors that have solid borders has proven to be a superior method for treating certain cancers. Proton therapy is preferable to standard radiation because it conforms to the shape and depth of a tumor to achieve optimal dose distribution and effectively spares nearby tissue and organs of residual toxicity, which may reduce susceptibility to side effects and post-treatment complications.

Although the price of proton beam technology has gone done in recent years, the cost continues to dwarf traditional radiation. Since the true value of proton therapy is still being defined, some experts fear the health industry is running headlong into a costly treatment option with too little clinical data to responsibly recommend it. Work is currently being done to assess benefits as they pertain to specific cancer sites and how those benefits compare with traditional radiation, but with so few proton therapy centers in existence that work takes time.

Currently, there are 14 proton therapy centers operating in the U.S. and 12 more in development. They are also emerging on a worldwide scale, with centers popping up in China, Europe, Japan, Russia, and Korea. With more facilities being built, more patients receiving the treatment, more companies investing in the technology, and more studies being published, proton therapy appears to be at a major tipping point. For insurance providers, this influx of interest paired with relatively few completed studies, presents a costly paradox.

Leonard Arzt, the executive director of the National Association for Proton Therapy, spoke to DOTmed HealthCare Business News about a few insurance providers, such as Aetna and Blue Shield of California, who have stopped covering the treatment. “It’s an evolving situation that is rapidly changing while ongoing clinical trials are being conducted providing more evidence of the value of proton therapy,” says Arzt. Patients should be fully informed of all treatment options and should have access to the mbest choice when it comes to their quality of life.”

Success with head and neck
At the MD Anderson Proton Therapy Center in Houston, Texas, patients have been receiving proton therapy since 2006. DOTmed spoke with their medical director, Dr. Steven J. Frank. “We’re seeing, before our eyes, a rapid evolution of the most advanced form of radiation therapy delivery,” says Frank. “It’s a very exciting time because we’re able to treat cancer with high curative intent and minimize patient side effects.” Frank was referring specifically to the latest advancement in proton therapy, a new form called Intensity Modulated Proton Therapy (IMPT) which has been used to successfully treat complicated head and neck tumors, and is believed to cause fewer side effects than cases where the alternative — Intensity Modulated Radiation Therapy (IMRT) — is used.
1(current)
2
3
4
5
6