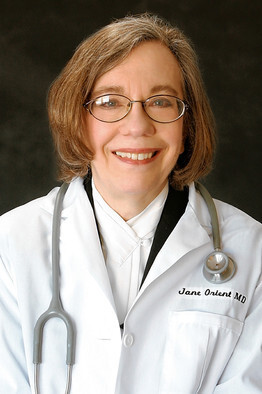 Dr. Jane Orient
Yesterday the World Health Organization issued staggering new figures on West Africa's Ebola outbreak. The latest numbers indicate that the mortality rate has risen to 70 percent (from a previous estimate of 50 percent). A month ago estimates had total cases around 4,300 and total deaths around 2,300, but the new WHO numbers have doubled those figures to 8,914 and 4,447 respectively. The overwhelming majority of cases continue to emerge out of Guinea, Liberia, and Sierra Leone.

Dr. Jane Orient, director of the Association of American Physicians and Surgeons, took time out to share her insights into the epidemic with DOTmed.

When Orient brought up Ebola more than six months ago at the Arizona Medical Association Public Health Committee Meeting, people were dismissive. "People said, 'Oh, well it's in Africa. It's going to stay in Africa'," recalled Orient.

"Every outbreak since the 1970's had been contained, but this one is different because it occurred in densely populated cities," said Orient. As populations increase so does the potential for viruses to wreak havoc, and the population in Africa has tripled in the last 40 years.

Taking stock of the domestic situation

In the U.S., Ebola has taken one casualty and infected two of that victim's care providers in the process. Orient believes it's not only reasonable — but wise — to expect more undiagnosed cases in the U.S. She thinks a greater effort must be made to quarantine people coming to the country from outbreak areas.

"It's all very well to be screening at airports," said Orient. "But it still won't catch everyone." She pointed out that the patient who arrived in Dallas had not been showing symptoms at the time of his arrival.

Responsibly acknowledging the Ebola outbreak is a challenge that affects everyone differently. Orient's advice is to be aware of what's happening in the world and pay attention to reports. "What if Ebola came to your town?," she asked. "Could you stay in your home for a day or a couple of days? Or would you need to go out and get food, medicine, other essentials?"

Orient said that with epidemics there is often a fine line between helping people responsibly assess the danger, and simply causing a panic. "We don't want to scare people into refusing to go to work or refusing to go to the store," she said, "I think that's much more likely to happen if people don't feel they can rely on the information that's coming from the authorities."

"Fortunately, we do have a blood test that can turn around results fairly quickly," said Orient. "So that we can assuage someone's fears if they have a fever or a history of exposure."

"Now that the nurse in Dallas has become infected and nobody seems to be exactly sure what happened to her," Orient said, "U.S. hospitals are increasingly concerned about what Ebola could mean for them." The potential for an airborne strain represents a new concern as viruses sometimes mutate rapidly depending on the necessities of their environs.

"One suggestion from the government is to have specialized facilities to deal with Ebola so there aren't one or two patients in hospitals scattered across the country," said Orient.

While Orient anticipates more Ebola victims turning up in the U.S., she also emphasized the incomparably more-horrendous circumstances raging in Guinea, Liberia, and Sierra Leone. Much of Ebola's success in West Africa can be attributed to extreme poverty, overpopulation, and lack of resources. Being cognizant of Africa's hardships may represent a vital step in limiting hardships domestically.