Behind the scenes at the UPS Louisville Technology and Logistics Center 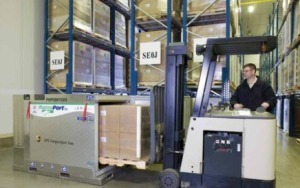 Meeting the (supply and) demand

Calling UPS a process oriented company is an understatement. For decades the company has strived to turn the finer logistical points of shipping into an art form. And with 46 health care integrated facilities in their distribution network, and unprecedented mergers and acquisitions happening in the health care industry, UPS intends to expand its logistical presence in the medical realm.

The company established its WorldPort, (headquarters) in Louisville, Kentucky, in the middle of the U.S. From that hub, it can reach 62 percent of the country in two days using ground transportation. But perhaps more incredible are the 130 aircraft which land there nightly, picking up and dropping off millions of packages at destinations all over the world.

Just 2.8 miles away from the behemoth that is WorldPort, UPS has established the Louisville Technology and Logistics Center (LTLC) where their health care footprint is increasingly making an impact on the pharmaceutical supply chain, as well as medical devices transport industry. The logistics and distribution emphasis began in 1996 and around 2005, the company started to make a concerted effort in health care.

Behind the scenes at the UPS Louisville Technology and Logistics Center WorldPort’s peak activity hours fall squarely in the dead of night. UPS aircrafts fly in from the four corners of the world, converging upon Kentucky, and their cargo is unloaded and sorted and reloaded in a mesmerizing feat of industrialism. Conveyer belts run in every direction, robots read barcodes, and employees push enormous containers across wheeled surfaces towards their next transfer. Many of the employees at WorldPort are local students who have their college education subsidized by UPS in exchange for their hard work.

UPS has a network of over 950 field stocking locations in more than 125 countries. Traditionally, these locations have been used for critical parts deployment with high tech and industrial sectors, but they are currently in the process of validating a number of those locations to accommodate medical devices. That shift towards health care may have serious implications for the company, and for health care at large. To get a better understanding of what it all means, HealthCare Business News took a tour of the LTLC.

Behind the brown curtain
The jaw-dropping enormity of WorldPort may undermine the vastness of the neighboring LTLC, but both spaces are huge by almost any earthly definition. Dan McKenna, UPS operations director, led us through one of several health care buildings; 800,000 square feet, with 500,000 dedicated to UPS health care customers.
1(current)
2
3
4
5