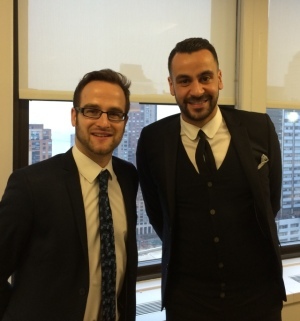 COPA Practice Growth
organizers Tom Penn
and Nathan Hendricks
Having built up and established the London COPA (Chiropractors, Osteopaths, Physical Therapists, and Acupuncturists) Practice Growth exhibition and conference, the organizers have decided to bring the event across the pond to the United States for the first time.

On behalf of the event, Tom Penn and Nathan Hendricks, Directors of Prysm London and the pioneers behind both COPA UK and COPA US, stopped by the DOTmed office to talk about the event, which will take place at the Javits Center in New York, NY, March 4th and 5th.

DOTmed News: Why did you decide to bring COPA overseas to New York?

Tom Penn: My first response would be: why not? The show in the U.K. has grown to a size where a lot of the multi-national companies who exhibit with us bring their CEO, Chairman, etc to the event, and some of them said to us, "could you do a show internationally?" The things we cover; physical therapists in private practice, large rehabilitation facilities for neurological, elite sports teams, rehabilitating players, they're all issues which are not just for the U.K.

Hence, we started looking around internationally. A couple of our big hitting exhibitors said, "Why not New York?," and since we have some business partners in Paramus, NJ, and it's always nice to be in another English speaking part of the world, it just made sense. Also, New York is very cool and we like doing cool things in cool places.

DOTmed News: What can attendees expect to see?

Nathan Hendricks: They can expect a live, interactive trade fair. I like to call it the anti-conference; it's something that's very engaging. This is not where you go just to meet up with your old colleagues and slap a few backs; it's education, it's insightful, and it's inspirational.

If you're a clinic owner you leave with more of a gauge of how you will grow your business and make more money than you did two days ago, if you're in elite sports you know you can see the latest innovations in technology that you can use directly on your athletes to combat and minimize the risk of injury. If you're in a neurological facility you can again, check out the latest innovations, you can be submerged in it with all the leading manufacturers in one place.

And it's all built around this seminar program and free to attend. If you look at the total package there are probably a thousand reasons to come to this event. It will be completely different to what's available in the rehabilitation market in the states; we're bringing a bit of European flavor.

TP: It's going to be actual product launches and market entry by four or five companies who have never been seen before in the United States, so that's very exciting.
1(current)
2