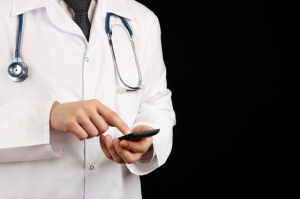 For doctors at Cincinnati Children's Hospital Medical Center, image sharing on social media is for more than posting filtered selfies or pictures of their dinner. Under the user name CincyKidsRad, the hospital has joined Figure 1, an app that brings medical professionals together around diagnostic images.

This 'Instagram for doctors' — as it's become known — is paving new inroads for radiologists and other physicians to learn from one another and test their own ability to interpret images.

At Cincinnati Children's they are no strangers to social media. The hospital is active on most major platforms, so when Figure 1 asked them to give their service a try, it was a logical fit.

"Even at RSNA we are limited to thousands of people in the audience, with social media our audience is much larger," said Dr. Alexander Towbin, a radiologist at Cincinnati Children's, to DOTmed News.

He and his colleagues draw their uploads from a back catalog spanning 20 years of digital images, and resist posting rare cases in which one might derive the identity of the patient. In the image captions they offer an age range of the patient instead of a specific age, which is part of their mission to ensure patient privacy is completely protected.

"We had posted a case, it had to do with a child swallowing a coin, the case and discussion involved how would you differentiate between swallowing a coin or button battery. Based on discussion, a friend was able to tell in the patient care setting which one had occurred," said Saad Ranginwala, a radiology resident at the University of Cincinnati.

Towbin and Ranginwala said it's great when something like that happens, but relying on contributors and content on Figure 1 to inform real world medical decisions is precarious, at best.

"We are not trying to solicit opinions, we are trying to be a source of educational content," said Towbin, who likens the app's usefulness to that of a textbook.

One challenge with the images and comments is that you don't have knowledge of the person giving feedback. Physicians can put in their national provider number and it "verifies" their account, but that doesn't tell you their specialty or add true credibility to their opinions.

Towbin says the app has value for everyone in the medical community, not just doctors. "We can spread a lot of knowledge and better the care for children, which is our ultimate goal."

Anyone can sign up for Figure 1, and — if medical images are your thing — the app can be very educational and perhaps entertaining. It's worth noting however, that some of the images can be very graphic.