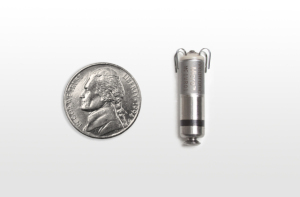 Courtesy of Medtronic plc
Medtronic PLC announced today that its Micra Transcatheter Pacing System (TPS) received a CE Mark. At less than one-tenth the size of traditional pacemakers, Medtronic claims that it’s the smallest pacemaker in the world.

Micra TPS is delivered through the patient’s femoral vein with a catheter and positioned inside the right ventricle of the heart. Unlike traditional pacemakers that require leads to deliver pacing therapy, this system is attached to the heart through tiny tines and delivers electrical impulses that pace the heart through an electrode located at the end of the system.

It also doesn't require a surgical pocket under the patient’s skin so it’s not externally visible like traditional pacemakers. Even though it’s miniaturized, it has a 10-year battery life and is MRI-compatible.

The CE Mark came on the heels of the completion of the Medtronic Micra TPS Global Clinical Trial, which evaluated the safety and efficacy of the system in the first 60 candidates over three months. The initial results of the trial will be presented for the first time at the Heart Rhythm Society’s 2015 Annual Scientific Sessions in May.

The trial is still ongoing and is developing into a single-arm, multi-center study that will recruit up to 780 patients at about 50 centers in 20 countries. The system is still an investigational device in the U.S. and is not approved for commercial use yet.