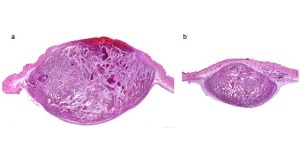 Courtesy
Institut Pasteur
Using a treatment normally administered to patients with type 2 diabetes, scientists at the Institut Pasteur and Inserm in France were able to increase the infiltration of immune cells into tumors, triggering the immune system to stop tumors from growing.

In an article published online this month in Nature Immunology, the researchers show that the process, in combination with existing immunotherapies, destroys cancer cells in mice.

The scientists observed that the enzyme dipeptidylpeptidase 4 (DPP4) is capable of degrading the small molecules, called chemokines, which can attract immune cells toward inflamed tissues, including developing tumors.

After the scientists orally administered a DPP4 inhibitor, called sitagliptin, which is used to help control blood sugar in patients with type 2 diabetes, they found that the development of several types of cancer in mice was slowed. Inhibiting DPP4 also increased the number of T lymphocytes that infiltrated the tumors and, along with other immunotherapies, eliminated the tumors.

Rosa Barreira da Silva, the study’s lead author, said the scientists first studied the process in melanoma because it is a challenging tumor to treat and it expresses a high amount of DPP4 upon implantation in the mouse. Melanoma can also be treated by a number of immunotherapies.

“Any kind of immunotherapy that is mediated by T cells or other lymphocytes would likely be aided by the administration of DPP4 inhibitors,” Barreira da Silva told DOTmed News.

DPP4 inhibitors are already approved for use in patients with type 2 diabetes, and shown to be fairly safe. “We think the translation and administration of these inhibitors with other, more traditional therapies can be fairly easy,” Barreira da Silva said.

The Dendritic Cell Immunobiology Unit, a partnership between Institut Pasteur and Inserm, and headed by Matthew Albert, will soon be starting a phase I clinical trial with clinical colleagues, including Stanislas Pol from Cochin Hospital, to evaluate sitagliptin treatment in patients with hepatocellular carcinoma.