The value of a reputation 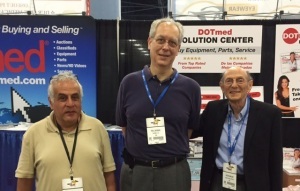 Gamal, Phil, and Peter
One of the problems with getting older is that you develop something called Oldtimer's disease, which makes it difficult to remember things.

For instance, as I walk the floor at the 25th annual FIME event in Miami, I cannot for the life of me figure out how many years I have been attending this event. But I do know that I should always expect to run into a few old friends when I'm here.

In the upper-right corner you'll see a picture of me standing between Health Care Exports' Peter Ehrlich (right) and Gamal Shanbaky of Gamma Medical Equipment (left) ... and while I may not be sure how many years I've attended FIME, I can tell you I've known Peter since 1980 and I've known Gamal for almost as long.

These guys have something special in common, and that is an impeccable reputation for honesty and integrity. When they say they will do something you can be sure it will be done, and that kind of confidence is so important in this industry — and in any industry.

In terms of FIME itself, I am not sure if there are fewer people this year or if they are just more spread out, but it seems as though the traffic is not as great as it has been in the past. Then again, it may pick up over the next two days.

There are a lot of DOTmed users here and we will be posting pictures sometime over the next few days of some other friends we caught up with. Seeing familiar faces is a highlight of attending events like FIME, especially running into guys like Peter and Gamal.

You can always make more money but you can never buy a good reputation — that's something you earn over time. Oldtimers know that as well as anyone.