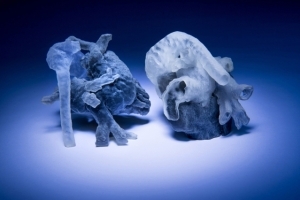 Courtesy of Bryce Vickmark
Researchers at Massachusetts Institute of Technology (MIT) and Boston Children’s Hospital have found a way to generate a 3-D model of a patient’s heart with MR scans in only a few hours. Surgeons will be able to use the models to plan surgery.

“Our collaborators are convinced that this will make a difference,” Polina Golland, a professor of electrical engineering and computer science at MIT and leader of the project, said in a statement. “The phrase I heard is that ‘surgeons see with their hands,’ that the perception is in the touch.”

MR data is composed of a series of cross sections of a 3-D object. Each of the cross sections have regions of dark and light, like a black-and-white photograph, and the boundaries between those regions may or may not be the edges of anatomical structures.

Historically, researchers generated printed models of the heart by manually indicating the boundaries in MR scans, but that can take eight to 10 hours. With the new model, a human expert identifies boundaries in a few of the cross sections and the algorithms fill in the rest.

Segmenting the sample patches and having the algorithm generate the digital, 3-D heart model takes about an hour and the 3-D printing process takes another couple of hours.

The researchers will be conducting a clinical study in the fall that will involve MR scans from 10 patients who already underwent treatment at Boston Children’s Hospital. The seven surgeons will receive information on all the patients, which will be used to generate MR scans and either a physical heart model or a computerized 3-D model based on either human segmentation or algorithmic segmentation.

With that data, the surgeons will create surgical plans that will be compared with documentation of the treatments that were performed on each patient previously. They hope to uncover whether 3-D printed physical models will improve surgical outcomes.