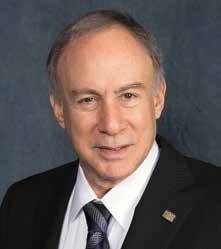 Dr. Ronald Arenson
RSNA is taking place as it has for years in Chicago the weekend following Thanksgiving (Nov. 29 – Dec. 4), HealthCare Business News spoke with current president, Dr. Ronald Arenson to find out more about his background, his goals for the association and what to expect at this year’s show.

HCB News: What attracted you to a career in health care?
RA: My father was a radiologist and I became very familiar with medicine growing up. I always thought I would be a doctor, but I did work for IBM during college and medical school and was tempted to continue in that direction.

HCB News: What attracted you to radiology in particular?
RA: As I mentioned, my father was a radiologist and I felt comfortable with that specialty. But during medical school, I was attracted to several other specialties. The chair of radiology at New York Medical College at the time was Dr. Dick Friedenberg and I was really impressed with him as a person and as a leader in radiology. I think that convinced me to choose radiology after all.

HCB News: Why did you decide to be the president of the RSNA?
RA: The RSNA is a world leader in radiology research and education and the premier membership association for radiologists. In addition, the RSNA is in a unique position to provide informatics tools to practicing radiologists to improve the services we provide our patients and referring physicians. My role as president has allowed me to guide the development and refinement of these tools.

HCB News: What initiative or initiatives did you champion during your time as president?
RA: As RSNA president, I have stressed the importance of the patient-centered care model and the need for radiology to shift from volume-based to value-based practice. As the health care industry grows increasingly complex and patients become more involved in their medical care, radiology must evolve to be more patient-centered. RSNA has been a driving force in improving quality, efficiency and safety of patient care in medical imaging through informatics initiatives and tools, including teaching files, the RadLex lexicon, structured reporting templates and RSNA Image Share, which gives patients greater control over their medical imaging records.
1(current)
2
3
4
5