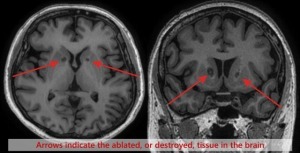 Courtesy: Focused Ultrasound
Foundation
The world’s first treatment of a  patient with severe depression using focused ultrasound has been performed in Korea, according to the Focused Ultrasound Foundation. Dr. Rees Cosgrove, head of epilepsy and functional neurosurgery at Brigham and Women’s Hospital in Boston, told HCB News the patient was treated on September 19.

The beauty of using focused ultrasound to treat patients with severe depression is you don’t need to do an invasive surgery, said Cosgrove, who has been performing surgery on patients with psychiatric illness since the early 1990s.

Described by the Focused Ultrasound Foundation as a potentially powerful non-invasive approach for treating patients with depression that’s resistant to medical treatment, focused ultrasound is a non-radiation treatment that eliminates the risks of open neurosurgery.

The patient in Korea is part of a 10-patient clinical trial to determine the feasibility and safety of MR-guided focused ultrasound to destroy a small amount of tissue deep within the brain called the anterior limb of the internal capsule. This study is led by Dr. Jin Wood Chang, a neurosurgeon at Yonsei University College of Medicine in Seoul, Korea.

“There is a need for non-invasive treatment options for patients with depression that cannot be managed through medication,” said Chang, who is also president of the Korean Neurosurgical Society. “We were able to conduct the focused ultrasound procedure without complications or serious adverse effects. We will continue to monitor the patient to assess how her depression symptoms change over time.”

The advantage of focused ultrasound is that it’s being applied to the same targets within the brain that surgeons have used in the past, said Cosgrove. The big difference with using focused ultrasound to treat severely depressed patients is surgeons won’t need to put electrodes through the brain and patients won’t have to experience all the potential consequences of an invasive procedure.

Lasting between 4 to 6 hours, the procedure requires that the patient be shaved bald, according to Cosgrove. It begins with the application of a local anesthetic to “freeze” the patient’s scalp and a frame is then attached to the head to keep it from moving around within the MR machine. Then the patient is placed in the MR and a fluid-filled bladder is attached to their head. The patient then lies in the machine for the duration of the procedure, which entails the surgeon making lesions using focused ultrasound—which they can view in real time via the MR. Cosgrove said patients may feel some heat, though they don’t experience any pain or discomfort during the procedure.
1(current)
2