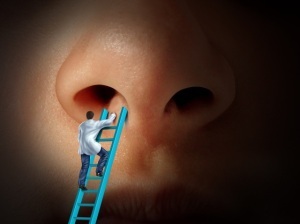 Just "follow your nose'' may turn out to be excellent advice for researchers eager to break new ground in the fight against Parkinson's.

A British woman who appears able to accurately smell Parkinson's disease has led to the launch of a new research project to determine if skin odor could be a key to diagnosing the condition.

Joy Milne's husband, Les, who died in June, aged 65, had the disease for nearly 20 years. "I've always had a keen sense of smell and I detected very early on that there was a very subtle change in how Les smelled. It's hard to describe but it was a heavy, slightly musky aroma. I had no idea that this was unusual and hadn't been recognized before," she told the Telegraph.

Milne made the connection to Parkinson's after running into other people with the odor once she got involved with the charity Parkinson's UK. At one meeting she happened to mention her odd sensing ability to researcher Dr. Tilo Kunath, a Parkinson's UK fellow at the school of biological sciences at Edinburgh University,.

This led to her becoming involved in a clinical test — and she proved to be uncannily accurate.

The scientists had 6 people known to have Parkinson's and six controls without the condition wear t-shirts for a day, which were then collected and presented to Milne for sniffing. "Her accuracy was 11 out of 12. We were quite impressed," Kunath told the BBC, adding, "She got the six Parkinson's but then she was adamant one of the 'control' subjects had Parkinson's."

Astoundingly, it turned out her accuracy was better than they thought. Eight months after the test, the very same control subject reported back to the researchers that he had just found out he had developed the ailment.

Researchers think the unique Parkinson's smell may be linked to changes in sebum – the "oil" on skin.

Research has now begun to find the science behind Milne's gift. This effort is being led by Professor Perdita Barran of the University of Manchester. Her team is looking into the precise chemical skin changes in people with Parkinson's.

Her team also plans to gather hundreds of samples from those with the ailment and then have Milne and possibly other "super-smellers" from the food and drink industry assess them.

"Funding pioneering studies like this has the potential to throw Parkinson's into a completely new light," said Arthur Roach, director of research for Parkinson's UK.

"Not just on early diagnosis," he added, "but it would also make it a lot easier to identify people to test drugs that may have the potential to slow, or even stop Parkinson's, something no current drug can achieve."