Has your organization lost its edge? 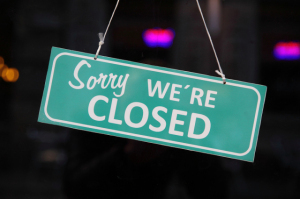 On Sunday night, after parking my car six city blocks from my loft, I was walking past Food Emporium, the grocery store, and a sign was posted that said, "Store closing - 40% Off."

I moved into my Tribeca loft in 1980 just after the United States and the People's Republic of China normalized relations, which resulted in the closure of the Chinese trading company I worked for.

In those days, we had no grocery store and I had to walk twenty minutes to Greenwich Village.

I remember when the Food Emporium opened, it was a big deal because it meant I only had to walk six blocks to do my shopping.

Some time ago, I started going to Whole Foods, which opened close by, as Tribeca blossomed into a fancy dancy neighborhood.

I stepped into the Food Emporium just for the sake of nostalgia and as long as I was there, I bought a few things. As I was standing in line, I ran into someone I knew from the neighborhood and we started talking about how we remembered when the Food Emporium opened and as we got to talking, we agreed that the reason we stopped coming to the Food Emporium was because of the quality of its customer service.

The staff was cavalier and sometimes even rude, never a smile, never a "You're welcome" and any assistance that was given was given reluctantly.

The store was a little bit tired because the staff really did not take pride in it anymore.

In short, they lost their edge and now they are closing.

Do not think it is because the prices are better at Whole Foods — because they absolutely are not. In any event, our zip code 10013 has more restaurants than any other zip code in the United States and I am going to guess that most people do not have a clue or a care about what things cost. The affluent buyers in my neighborhood stopped going there because the customer service had gone downhill.

This, I think, is a lesson for everyone. If you want to keep your customers, take good care of them.