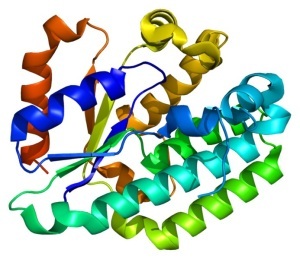 Structure of the dCK protein
via Wikimedia Commons
Researchers at the UCLA Jonsson Comprehensive Cancer Center spent seven years trying to better identify and understand the role of the deoxycytidine kinase (dCK) enzyme in cancer mutations through PET imaging — and findings published March 28 in the journal Proceedings of the National Academy of Sciences of the United States of America outline some exciting progress.

Since there was not a PET probe available for imaging the enzyme, they developed a highly sophisticated PET probe called [18F]CFA that is capable of detecting dCK activity in humans for the first time.

Radu said the quality of the images using the new PET probe is much improved. “We are able to clearly see tissues, including tumor tissues, with high dCK activity that we haven’t seen before in humans using any of the other probes previously developed for this enzyme.”

The lengthy study started with cancer cells, progressed to mice and then finally was applied to human subjects. He explained that the study required the team to develop a more complete understanding of the molecular mechanisms of the target.

“Such knowledge is critical for enabling accurate interpretation of clinical findings using the new diagnostic tool,” said Ruda. He said that when injected into a mouse or a human, the probe is trapped in cells expressing high levels of the target enzymes.

“The trapping mechanism involves a modification on the probe mediated by the enzyme. This modification prevents the probe from diffusing out of the cells which express the enzyme,” he explained. “This enables their detection and quantification at a whole-body level by PET imaging.”

According to Radu, the dCK enzyme is vital in developing drug therapies to treat certain types of leukemia, breast, ovarian, non-small cell lung, and pancreatic cancers. The new PET probe is essential in developing the therapeutic effectiveness of an entire class of anticancer and antiviral drugs.

“A PET scan using this probe may provide information that could assist physicians to select the most appropriate treatment for a cancer patient. It (dCK) can take an inactive drug and activate it,” said Radu. “If you trick a cancer cell or virus to activate the drug, it would be toxic for the cancer cell or viral genome.”

The researchers hope to begin clinical trials soon and eventually seek FDA approval. Despite the seven year timeline to date, Radu stressed the research is still in its early stages.

“We strongly believe that the most important outcome of the current study would be to see ... other groups start producing the probe, and study independently from us,” he said.