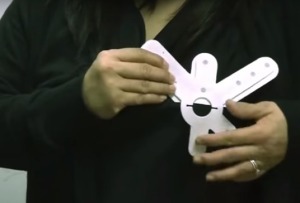 The iTBra as seen in the
Cyrcadia Health video
The iTBra — a wearable device that relies on a woman's circadian rhythm to detect breast cancer lesions earlier and reduce false positives — is showing promise as researchers accumulate more data.

The developer, Cyrcadia Health, has announced it will expand the field trials for the smartphone-enabled technology to a second site at The Stefanie Spielman Comprehensive Cancer site at The Ohio State University. The company is also working on a third trail expansion internationally with the Medicine X group at Stanford University.

“We typically think of medicine being performed in a clinical setting,” Rob Royea, CEO and chairman at Cyrcadia Health, told HCB News. “But our device flips that model on its head to empower the individual. We can track changes over time to find disease earlier, reduce costs and get better outcomes for women who develop breast cancer.”

He said that current testing is designed to show how the device could reduce false positives, which account for 70 percent of breast biopsies and contribute $1.6 billion in unnecessary health care spending annually.

The iTBra works by attaching a patch to each breast, similar to an EKG Holter monitor.

The device, which fits comfortably under a bra, measures and stores the body’s circadian rhythms, generated by natural light changes to a woman’s genetic make-up. According to Royea, these measurements can be collected in from two to 24 hours.

This data is then uploaded to a global cancer library site where a proprietary set of predictive algorithms analyze the information for abnormalities to indicate the presence of early breast cancer lesions.

“The analysis is fully automated with no human intervention,” said Royea. “A woman can wear the device while shopping or taking care of her children. The predictive analysis is sent to her doctor who can then follow-up with the patient.”

According to Royea, a former Johnson & Johnson and Siemens executive, there are other advantages to the iTBra. Early tests show promise in determining the difference between tissue-infused and encapsulated cancers in the milk duct of the breast. This diagnosis currently requires a biopsy — which can transfer active cancer cells to surrounding tissue — to confirm.

The device may also reduce a woman’s exposure to mammography, as well as the radiation and compression discomfort that accompany those exams, said Royea. Cyrcadia has been invited to help screen women internationally who refuse to expose their breasts to physician or hospital staff for religious reasons.

“It’s quite exciting to have The Ohio State join the current study,” said Royea. “The clinical team there had experience with an earlier version of the device that did not have the scalability of the current device.”