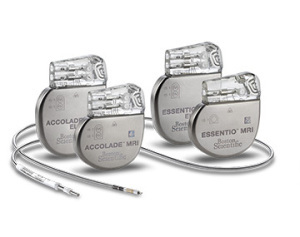 "With this approval, we believe we have the devices that offer the most comprehensive set of options for patients who need pacing therapy," Dr. Ken Stein, chief medical officer of the rhythm management division at Boston Scientific, told HCB News. "Should patients need to undergo magnetic resonance imaging after being implanted with our newly approved system, they are assured their device will be safe for use during their scan."

The INGEVITY MRI pacing leads are used to treat patients with a condition that causes the heart to beat too slowly called bradycardia. The leads include both active and passive fixation models, which marks the first time a passive fixation pacing lead is approved in the U.S. for patients undergoing MR exams.

The ImageReady System was approved after two global clinical trials proved its safety and efficacy. The INGEVITY trial was a prospective, non-randomized study that tested the leads in 1,036 patients with a single- or dual-chamber pacemaker.

The SAMURAI trial was a prospective, randomized study that tested the ImageReady System on 351 patients with a single- or dual-chamber pacemaker in an MR environment.

In the first trial, the INGEVITY MRI had no MR-related complications and very low rates of complications overall. The SAMURAI trial showed that the ImageReady System provides clinicians with reassurance that they are implanting pacemakers that are safe in an MR environment if their patients require an exam in the future.

When paired with the LATITUDE NXT Patient Management System, the ImageReady System allows physicians to receive patient information through customized alerts. The tool is able to improve survival in patients with pacemakers, according to a study from June 2015 published in the Journal of the American College of Cardiology.

Earlier this month, Medtronic received FDA approval for the world's smallest pacemaker, its Mica Transcatheter Pacing System. It's the first and only transcatheter pacing system that is approved for both 1.5 and 3T full-body MR exams.

In recent years, an increasing amount of MR-conditional pacemakers and intravenous cardioverter defibrillators (ICDs) have entered the market. In DOTmed HCB News' March issue, we will explore MR-conditional ICDs in more depth.

Boston Scientific is actively pursuing MR compatibility for its approved ICD and cardiac resynchronization therapy (CRT) systems through its global ENABLE MRI study, which was started earlier this year. The findings of the study will be submitted to regulatory agencies in Asia and the U.S.

"Overall, we are very pleased to have this system now approved in the U.S.," said Stein. "In Europe, we have a full portfolio of devices with MR-conditional approval and our intent is to get the same approvals in the U.S."