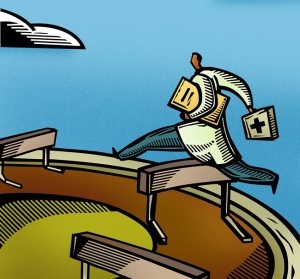 Speakers at SIIM webinar call
for embracing cloud storage
Much of the anticipated cost savings in reinventing health care delivery is riding on creating an accessible, accurate patient file that can be easily shared with all hands-on caregivers, no matter the location.

One of the most difficult aspects of achieving this has been the deconstruction of PACS and the linking to VNA's — but experts speaking during an SIIM webinar held last week reassured 500 imaging informatics professionals that it's a "solvable problem" nonetheless.

Part of accomplishing this requires imaging departments to give up proprietary “legacy” PACS reading and workflow systems. At the same time, hospitals and doctors are going to have to also make the switch to cloud storage systems that "play nice" across the enterprise. All this requires the right technology partners who will be around for the long haul.

“I call it the ‘Puff the Magic Dragon' problem,” Richard Kennedy, technical director of imaging informatics, Northern California Kaiser Permanente, told the crowd. “Hospitals live forever but not so startup IT companies.”

Kennedy said with instant and secure cloud storage solutions offered by such big companies as Google, Amazon and Microsoft, there is no longer a need to build in-house archiving storage capability. These companies have a proven track record for security.

“Finances don’t have to dictate if you choose between a new 3T MRI and a new PACS,” he said, the implication that both are possible when combined with the relatively inexpensive option of online storage. “We need to overcome the resistance to cloud archiving solutions.”

These three big cloud providers offer on-demand, instant, vendor-neutral record archival. He did concede that the cost of high-speed bandwidth must be factored. But he noted that such costs are dropping.

He spoke to the group at length about “PACS deconstruction” — the process of separating the archiving component of many older, or legacy, PACs systems from the workflow and viewer functions of the system. Some of the related issues of separating – or deconstructing - these operation systems include cleaning up inaccurate record identifiers. This requires good automated review and correction functions.

“To accomplish just a name change still, unfortunately, requires a manual process,” said Kennedy. “We want automation to synchronize records, not people with fingers on keyboards.”

But to keep from having to fix a mistake twice, the automation needs to be carefully monitored. He cited the case of a father and son with similar names. If not handled properly by an automated reconciliation program, these two patients could be incorrectly combined into one record.
1(current)
2