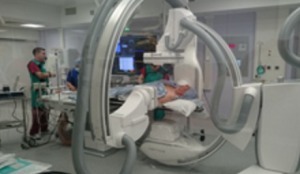 “Patients that are having pacemaker implants for heart failure can now have these implants tailored to their particular needs,” Dr. Kawal Rhode, Ph.D., professor of biomedical engineering at King’s College, told HCB News. “We have seen that the use of this technique can improve the patient's response to pacemaker implant both short and long term.”

A properly-fitted pacemaker can significantly improve a patient’s quality of life and can even be lifesaving. Rhode said this new integrated MR and X-ray protocol actually provides a 3-D model of the patient’s heart superimposed over the X-ray during the procedure.

About three million pacemakers are implanted worldwide per year, including about 10,000 in the U.K. In the U.S., more than 400,000 patients received pacemakers on average per year, according to 2012 data published in the Journal of American College of Cardiology.

“One of the research areas of my team is how to use medical images in a quantitative way to solve health care problems,” said Rhode. “Heart disease is one of the most common illnesses and can have a considerable effect on the [patient's] quality of life.”

Physicians associated with the project share Rhode’s optimism about the results so far.

“Integrating the MR and X-ray images boosts the accuracy of the implementation procedure and we believe it increases the likelihood of a successful pacemaker fitting,” said Dr. Aldo Rinaldi, a consulting cardiologist on the project.

According to Rhode, the initial testing of the integrated imaging technique will conclude in about a year. Then, Siemens Healthcare, which is a collaborator on the project, will take the technology forward for commercialization.

He said that the end result will likely be a software add-on for a cardiac catheter lab in which implant procedures are performed. Based on similar technology add-ons, he estimated the cost of the software to be around $75,000.

“This cost must be put into the context of a single pacemaker implant, which is similar in cost. Therefore, the single outlay for the technology may have a very considerable financial benefit in the long term if it reduces the failure rate of implants,” he said.