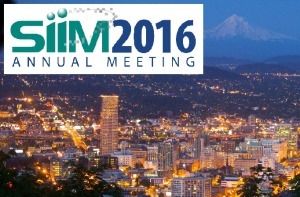 'Right now it's where PACS was in 1999'
The four members of the SIMM-HIMSS workgroup dedicated to organizing protocols and best practices to expand imaging record integration beyond the radiology department — a feat known as enterprise imaging — attracted a full capacity crowd in a first day session yesterday at the annual SIIM meeting in Portland.

In a wide-ranging discussion, including comments and questions from the audience, the panelists addressed a variety of factors — from governance, to vendor-neutral achieving, to the need for physician champions.

When co-chair Louis Lannum, director of enterprise imaging at the Cleveland Clinic, asked how many of the 100 or so people in the room were from health care organizations that were either rolling out an enterprise solution or had an enterprise strategic plan, only about 20 percent responded by raising their hand.

“This is a new field and right now it’s where PACS was in 1999,” co-chair Dr. James Whitfill, of Scottsdale Health Partners, told HCB News. “Real world problems are to be expected, but enterprise imaging is a lot more complicated than the PACS roll out.”

During the session, Whitfill encouraged the audience to get involved while his colleagues offered them advice and feedback.

It’s difficult to bring about grassroots change in a health system without conversation, according to Dr. Christopher Roth, CIIP, Duke University Health System. “You can’t get to owning the imaging process without lines of sight between different parts of the organization,” he counseled.“

He advocated commencing dialogue with any players in the system who want to talk, so that eventually these talks could lead to aligning the imaging enterprise solutions with the business plan for the organization. “What the C-suite cares about is spending that helps them improve quality and care – a metric like reducing scheduling time.”

Lannum said if an old legacy system needs to be replaced, that’s a great time to make the case for spending a little more money to also achieve enterprise imaging capability across the system. He also told the room to get a physician advocate on board.

“I won’t even go into a department (to make changes) unless there is a physician champion helping us,” said Lannum.

He also spoke about the importance of VNAs, citing the case of three OB/GYN practices that used three different imaging platforms. All three came to the hospital with requests for new — yet different — systems. With a strong governance oversight function in place, Lannum said the hospital was able to get the three practices to agree on a common vendor-neutral system.

According to Cincinnati Children’s Hospital Medical System's Dr. Alexander Towbin, the likelihood of one common viewer is slim, but it is certainly possible to reduce the number of platforms to a manageable few.

He talked about the problems associated with “medical photographers” — people who use their cell phone or other devices to make imaging photos that don’t end up in the medical record. “Also, how many of you can walk into a department and find thumb drives with patient images and unsecured demographics in drawers?” he asked.

The majority of hands in the audience went up.

Roth said that when thinking about enterprise imaging it’s important to pay attention to physician need. "You have to watch their workflow and offer good solutions – you can’t wreck their practice over this. The bottom line is that it also takes some creativity.”