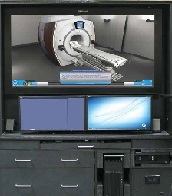 Along with a shortage of physicians, there will also be a lack of health technology management (HTM) professionals in the next few years. To solve this problem, in-house HTMs and parts companies are starting to focus on training. “Across the industry you’re going to see a pretty massive wave of retirements in technical talent in the next three to four years,” says Rob Rielly, vice president and general manager of service at GE Healthcare.

GE is also experiencing the same problem in its own organization — about 5,000 people work in its service segment and 750 of them are expected to retire in the next three years. Much of what the company does within the organization regarding training is being offered to the broader industry because it recognizes they can benefit as well.

“A lot of folks who have experience are retiring, and a lot of health systems either haven’t or can’t make the investment to build the infrastructure to do the training, so it’s a lot easier to come to somebody like us,” says Rielly. About 30 percent of the training GE does is for in-house HTMs and they are in the same classes as GE’s HTMs. GE trains about 5,000 HTMs per year, compared with in-house groups that usually can only train a dozen.

“In the past it was an anomaly if you had one in-house engineer sitting in a class, but now in virtually every class they are sitting side by side with our people,” says Rielly. GE has started using a new, innovative approach to service training with the use of real-time simulators.

Simulators are used in numerous industries, but GE decided that the health care sector can benefit from them as well. The simulator for MR training is tactile and mimics the noises that the machine makes. The HTMs have to remove the covers of the MR and manipulate a screwdriver, just like they would in a real setting. “It absolutely tries to simulate as much of that machine as you can to make it realistic,” says Rielly. “That is where the gaming element and some of the things we learned from the military really come into play.”

Virtual classrooms
Philips also believes in the importance of offering training to HTMs. In addition to four Philips training campuses located in Cleveland, Ohio, the Netherlands, Singapore, and China, the company has a multi-vendor training center at AllParts Medical in Nashville, Tennessee.

The training centers offer technical training and support for the full array of Philips imaging and monitoring systems. All of the students also receive a similar level of training in MR, CR, ultrasound and portable and fixed X-ray systems from manufacturers other than Philips. Philips has a training program called Virtual Classroom Delivery in which much of the training takes place through online, interactive classrooms. The learning content for high-end equipment like CTs has been redesigned to use distance learning and asynchronous techniques.
1(current)
2
3