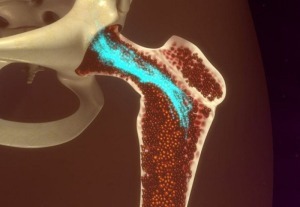 Chemists at Trinity College in Dublin have figured out how to get 3-D bone images without exposing patients to radiation.

The team accomplished this by attaching luminescent compounds to tiny gold structures that, in turn, cling to cracks or weaknesses in bone and provide visualization of the structure. Their work was published in the research journal Chem.

"We were able to develop ways of not only visualizing the small micro-cracks in the bone, but also map the entire area in 3-D using the so called Z-stacking method and two-photon excitation," Thorfinnur Gunnlaugsson, Professor of Chemistry at Trinity College Dublin told HCB News.

He added that their research findings are the result of collaboration with Clive Lee, M.D., Ph.D. at the Department of Anatomy in the Royal College of Surgeons.

The technique could have major implications in the diagnoses of bone strength. It also could provide a detailed blueprint of the extent and precise positioning of any bone weakness or injury. This diagnostic knowledge could help prevent the need for bone implants and act as an early-warning system for people at a high risk of degenerative bone diseases, such as osteoporosis.

The science works by creating a carrier composed of biocompatible gold nano particles. According to Gunnlaugsson, a "bone crack targeting molecule" is functionalized by adding a molecule that binds to lanthanide ions and europium. This, in turn, creates a luminescent "assembly" which is applied to the bone and brought to life with a florescence microscope.

"As the lanthanide ion can be changed out for a gadolinium we should, in theory, be able to convert these luminescent imaging agents into magnetic resonance imaging agents," explained Gunnlaugsson. "That is something we are also working on at present. However, the sensitivity of that imaging platform is not as sensitive as the one developed here."

Gunnlaugsson acknowledged their 3-D bone scanning protocol has a way to go before it is applied for human diagnostics, adding that progress will depend on interdisciplinary research and funding.

"We are some distance away ... But the future is very bright for this technique and it will, hopefully, be a method that can complement the use of X-rays," he said.

Gunnlaugsson added that the two-photon excitation used in the procedure is a "real future application". It allows for deeper penetration of light that is much less harmful to patients than high energy light.

The work was funded by Science Foundation Ireland and by the Irish Research Council.