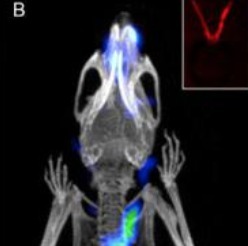 "Atherosclerosis is one such disease where proteases are activated during inflammation and this activity is important for the pathology of the disease," Matthew Bogyo, Ph.D, one of the lead authors and professor in the Department of Pathology at Stanford University School of Medicine told HCB News. "My lab has been working on small molecule probes of proteases for a long time."

Those with a build-up of plaques in their arteries can go decades with no symptoms. The disease often does not announce itself until a stroke or heart attack occurs. Bogyo said their research in mice could eventually lead to diagnostic protocols to identify people who are at high risk for cardiovascular events.

"We hope that this reagent (probe) could be validated in human clinical trials soon and be used to specifically highlight ‘vulnerable’ plaques that are likely to rupture due to inflammation," said Bogyo.

The team's study was just published in the October issue of The Journal of Nuclear Medicine.

According to Bogyo, the team found that the probe — which is dual labeled with a fluorescent reporter and a radioactive tag that can be used for whole body non-invasive imaging — binds itself to the proteases at the site of inflammation in arteriosclerotic plaques.

"We demonstrated that this probe could be used to monitor plaques in a mouse model of the human disease," explained Bogyo. "It also could be used to label plaques isolated from human patients with atherosclerosis, confirming that the reporter works in humans."

The study demonstrated that targeting the proteases offers a rapid, non-invasive way to image atherosclerotic disease progression and plaque vulnerability. He sees broader uses for the probes in the future. This includes the ability to allow specific targeting of disease-associated proteins or markers that allow monitoring of disease onset, progress and response to therapeutic agents.

“The probes show efficacy in a variety of imaging modalities, including fluorescence, PET/CT, and topical application of the probe to fresh frozen murine and human tissue sections," said Bogyo.