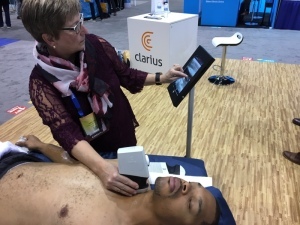 #RSNA16
Neena Rahemtulla has the wide-eyed smile of someone enjoying a high level of interest in a product she hopes to bring to market soon..

The vice president for marketing at Clarius Mobile Health said the interest has been “crazy” since the company announced its mobile ultrasound scanner earlier this year. Rahemtulla and several of her Clarius colleagues are at RSNA this week demonstrating the device to a worldwide audience.

“We think the FDA approval could come any week now,” Rahemtulla told HCB News. “It was developed because doctors have been asking forever for a handheld, portable ultrasound that would work with their iPhones.”

“It features a lot of automation, so it's easy to learn and use at the bedside,” said Rahemtulla.

The handheld device is joined with a tablet-sized screen that operates intuitively, as with other tablet devices. The perspective and frequency change as the operator zooms in and out with finger touches, to provide clinical-grade image quality.

Patient records are received on the Clarius cloud. The image's patient identifier and data are stored separately to comply with privacy laws. The information can then be transmitted through a DICOM-compliant interface to end users in hospitals and clinics.

The device will come standard with two batteries, with an hour of use on each battery, and a 90-minute recharge time. The device is built with a magnesium case for durability, and is water-resistant for cleaning and sterilization.

“There are no cables, no need to find a plug, no need to have a large room to allow for bulky equipment,” said Dr. Kevin Irish, an interventional radiologist who has been using Clarius in test situations, in a statement. "I can literally walk into a room with the patient and can begin scanning. Clarius will be ideal for pain management and limited interventional procedures such as line placements, thoracenteses, paracenteses and biopsies."

According Rahemtulla, the Clarius portable device is designed to image the abdomen and lungs. It also incorporates a virtual phased array for quick scans of the heart.

As for the cost of the system, it is pending, along with FDA approval.