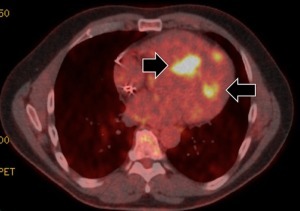 New imaging diagnosis for cardiac sarcoidosis
Researchers at the University of Illinois at Chicago (UIC) think they have found a much better way to find a sneaky condition that disproportionately kills African Americans.

"So far, active cardiac sarcoidosis (CS) has been a diagnostic challenge to physicians and scientists and is a potentially lethal disease, posing threats to patients," Dr. Yang Lu, lead author and chief, nuclear medicine & PT/CT, UIC, told HCB News. "Clinically, the presentation of CS is nonspecific and can range from asymptomatic, to chest pain, to abnormal EKG, to sudden death."

According to Lu, until this study, which has just been published online at Clinical Nuclear Medicine, there was no well-accepted, "good" imaging test to diagnose CS. The condition is especially prevalent in African Americans. Past diagnosis has been made by a combination of several diagnostic tests, but is often ambiguous.

In the study, patients were instructed to eat a high fat and protein, low sugar and carbohydrate diet for 72 hours before receiving a hybrid radio tracer (fludeoxyglucose or FDG) under PET/CT scan. The FDG collected in high-metabolic cells that use lots of sugar for energy, including cancer cells and cells affected by inflammation, such as that caused by CS.

Sarcoidosis is an inflammatory disease that attacks multiple organs. These include the lymph nodes, lungs and heart. The heart strain associated with CS can be deadly, and is particularly difficult to diagnose.

Lu said that when they started the study, patients were put on the diet for 24 hours. But this protocol only yielded clearer CS indications in about half the studies. Then a patient arrived a day late.

"The patient had been following the high-fat, low-sugar diet for two days at that point instead of the usual 24 hours," Lu said.

When they scanned the patient, the areas where the heart picked up the FDG were much clearer, and showed active CS. These findings were consistent with the abnormal CS findings from the patient's MR scan. Based on that patient, they set the dietary protocol at 72 hours.

"This protocol is simple and straightforward [and] might change the way we use FDG PET/CT for a CS diagnosis," Lu said.