Tricuspid valve stent, not yet FDA approved, implanted via catheter in compassionate use case 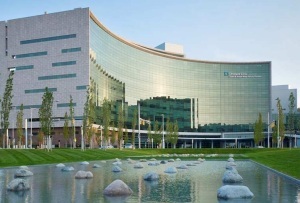 Cleveland Clinic
A valved stent designed specifically for diseases of the right side of the heart was successfully implanted in a patient at Cleveland Clinic with a catheter-guided technique, under expanded access, or the use of a medical device or drug that has not been approved by the FDA.

The stent, developed by Lake Forest, Calif.-based NaviGate Cardiac Structures Inc. (NCSI), and called the GATE tricuspid Atrioventricular Valved Stent (AVS), was developed specifically for diseases of the tricuspid valve, for which there is no minimally-invasive treatment.

Expanded access, also called compassionate use, allows patients to receive unapproved treatment for life-threatening diseases outside of clinical trials when there is no other alternative treatment.

“This is a patient who had no recourse,” Dr. Rodolfo Quijano, the company’s founder and chief executive officer of NaviGate Cardiac Structures Inc., told HCB News.

The 64-year-old patient had an extensive history of severe tricuspid regurgitation, in which blood flows backward into the atrium, a condition that eventually results in right heart failure and death.

"This patient's annulus measured 49.7 millimeters in diameter, and there are currently no valved stents that can secure such a dimension, without extending into any of the chambers, and still provide valvular function; yet there are millions of patients in the USA and worldwide presenting with this problem," said Dr. Samir Kapadia, a Cleveland Clinic interventional cardiologist, who also serves as a scientific advisory board member to NCSI, in a statement.

The tricuspid valve, when enlarged, can become twice the size of the mitral valve in the left chamber of the heart, which can be repaired using a minimally invasive, FDA-approved technique.

Treatment for tricuspid regurgitation, especially in the later stages, is generally not successful in the long term, and patients are also at a high risk of death with invasive cardiac surgery, Quijano said.

“The only way to really stop it in its tracks is to put a valve in there so the liquid cannot go backward,” Quijano said. “That is our quest. We believe that what we’re doing will be faster, easier and more reliable to solve this problem.”

Quijano said the company hopes to start a clinical trial for the GATE tricuspid AVS — which has been developed and manufactured by NCSI after it licensed the technology from Cleveland Clinic — in the middle of this year.

The company is currently conducting clinical trials, in Chile and Poland, of its NAVI mitral valved stent to treat functional mitral regurgitation, a similar condition.