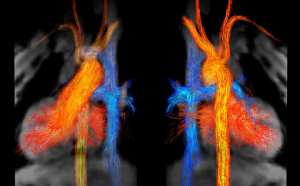 Researchers believe that the stunning images that can be produced with 4-D MR imaging are not only moving closer to becoming a reality on the frontlines of medicine, but they can offer meaningful new solutions to serious medical problems.

"The strength of 4-D flow MR is its ability to help gain an understanding of complex situations," Michael Markl, Ph.D., director of cardiovascular imaging research at Northwestern University, told HCB News. "For example, in congenital heart disease that cannot — or can only incompletely — be assessed with other imaging modalities."

Markl has been working on bringing up 4-D MR imaging for more than a decade. Most recently, the American Heart Association cited the technique in its journal Circulation: Cardiovascular Imaging, for its potential in predicting the risk of stroke in atrial fibrillation patients. Afib patients account for up to 30 percent of strokes every year.

Cardiologists who are trained to see the heart working in real time through a variety of imaging techniques — from MR to echo scans — can also watch complex blood flow unfold over time with 4-D MR flow.

"Compared to other MR tests, 4-D flow is very easy to perform ... compared to standard techniques that often require multiple 2-D measurements during breath-holding," explained Markl. He added that 4-D MR offers new information that is not easily optioned or impossible to assess with other diagnostic tests, such as time-resolved 3-D blood flow though all four cardiac chambers and valves, acquired in a single scan.

In addition to being useful, 4-D MR images are rich and beautiful. One of Markl's graduate students recently took top honors in an annual scientific image contest with a still submission of a 4-D MR image (above).

According to Markl, several significant steps were achieved in the past one to two years to advance the 4-D modality, including adoption of a consensus statement on the clinical use of 4-D flow MR by leading academic groups in the field.

He also said that the supporting software is starting to catch up with the technology of 4-D MR imaging. Markl noted that a barrier to 4-D MR use has been efficient and robust data analysis. This, he said, can be challenging, as 4-D MR flow scan can generate up to 10,000 images. New software solutions in development will solve this problem.

"A lot of pieces are currently falling into place and I am very optimistic about the potential of the technique to advance to a mainstream imaging test," said Markl.

Markl also told HCB News that advances in 4-D MR imaging rely on collaborative efforts across disciplines, such as M.D.-Ph.D. joint work. And he said the recent presidential order restricting travel to the U.S. will have a negative impact on collaborations among international research groups.

"My cardiovascular research group Northwestern, alone, is composed of students, postdoc, and faculty from seven countries, among them Iran," said Markl.