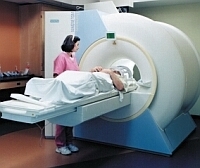 Proposed EU rule directly
threatens clinical and
research use of MRI machines.
The European Parliamentarians, patient groups, scientists and members of the medical community are working to avert a serious threat to MRI use. EU health and safety legislation that would go into effect in April 2008 would have the impact of regulating clinical and research use of Magnetic Resonance Imaging.

In 2004, the European Union adopted new regulations aimed at protecting workers from exposure to electro-magnetic fields, which are linked to adverse health effects such as dizziness. The Directive (EU Physical Agents 2004/40/EC-EMF) is a broad regulation that is not aimed at the health care industry. The European Society of Radiology says that the MRI impact is an unintended consequence. ESR also pointed out that the impact assessment for the rule is ten years old.

Nevertheless, if the rule takes effect it would directly threaten clinical and research use of MRI. The alternatives to MRI might shift more patients to X-ray or CT alternatives, "technologies with significant proven health risks," the ESR indicated. The directive would also stop the use of MRI for interventional and surgical procedures, and squelch important research.

The Alliance for MRI will lobby health officials and propose amended EU-wide legislation to exempt MRI from the rule.

A panel discussion of the situation took place at the recent European Congress of Radiology in Vienna. The panel included Prof. Nicholas Gourtsoyiannis, ESR President, Prof. Gabriel Krestin, Chairman of the ESR Research Committee, Dr. Hannes Swoboda, Member of the European Parliament and Vice-Chair of the Party of European Socialists, as well as Ingela Meulenbergs of the European Federation of Neurological Associations.