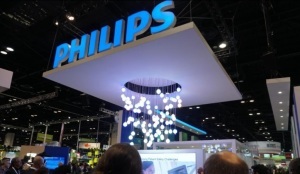 #HIMSS17
As HIMSS kicked off on Monday morning, five Philips executives met with a small group of reporters to discuss the company's singular commitment to advancing population health management and informatics.

“It’s a modified early warning system that makes decisions on two of our units,” said Dellsperger, a cardiologist whose facility is in a three-year partnership with Philips.

IntelliVue Guardian technology reveals subtle changes in respiration oxygen levels four to six hours before cardiac arrest. He said these changes are so slight that without notification it's common for inexperienced resident physicians and new nurses to miss them.

The technology has resulted in an 88 percent reduction in predictable codes, added Dellsperger.

“This fills an important gap for our nurses, who are staffed at a six-to-one patient ratio,” he said. “They check on patients once an hour and often aren’t taking vital signs. This gives them the tools they need to identify patients most at risk.”

Jeroen Tas, Philips' newly appointed chief innovation and strategy officer, outlined another Philips project in development that will similarly monitor vital signs, such as respiration and skin hue, of patients waiting in the emergency room. The technology uses predictive analytics to perform triage and can alert the emergency staff if a patient needs to be seen as a priority.

“We’re looking at health in a different way,” Tas said. “In the era of fee-for-value delivery we must support [everything from] healthy living, eating and prevention, to precise diagnosis with the technology, and the right therapy. This includes when patients transition out of acute care to tracking them at home after discharge.”

Sanjay Chikarmane, senior vice president and general manager of Enterprise Informatics, at Illumia, a Philips partner, spoke of the company’s precision medicine research. He noted that the first sequencing of human genomics, achieved in 2003, took ten years and cost three billion dollars. He noted that today’s instruments can now sequence the same sequences in under a day for less than a thousand dollars.

“We’ve overcome the barriers of time and cost,” said Chikarmane. “Now the challenge is to interpret all this data.” He said that the Philips gnomic platform has the capacity to take such gnomic intelligence mainstream by making the information clinically actionable.

“'Value-based' continues to change delivery to population health,“ said Tom Zajac, business group leader for Population Health Management at Philips. “One of the keys is not just who to target in terms of population health, but what action is needed going forward — from when the patient moves from hospital to home, and providing device coaching — to providing a complete care environment.”